The world record trout fishing has been defeated, and belongs to New Zealand.
A 71 years fisherman , Otwin Kandolf,  had that chance just with a little red spinner.
On 8 March 2013, he was fishing with a friend in the channels of the Mackenzie County, known for its monstrous trout. And he had the chance to catch this monster trout of 42 lbs., 1 ounce (19.1 kilos) . 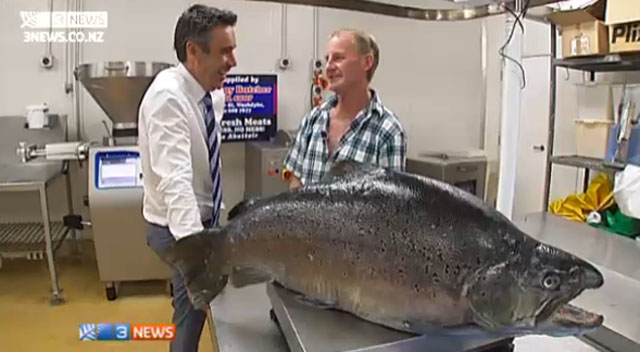 The fisherman had no balance nor camera at his disposal to register his trophy. So the fish has been kept in the fridge for a nearby pub, which explains the bad quality of the picture.
These days, the IGFA (International Game Fish Association) has approved the record: it is indeed the biggest brown trout ever caught. Or at least approved.
The previous record is beaten a few grams:  a  41lb 8oz (18.82 kgs) Trout caught on July 19, 2010 in Lake Michigan, USA (see here).

10,000 Facebook Fans
Posted on 6 August 2013 by LePecheur
This entry was posted in Fishes. Bookmark the permalink.