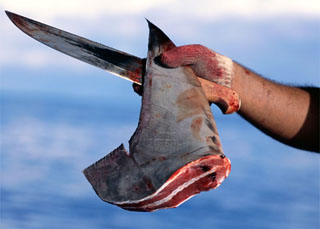 Shark does not have the chance to be as cute as dolphin or  panda, and movies like Jaws have not done much to restore the reputation of this essential predator. Slaughtered in the general indifference, only for its fins, the shark is in danger. The number of sharks killed each year to make soup for the Asian countries is estimated between 100 million and 270 million.
The marketer Joe Chernov has partnered with designer Robin Richards for publishing this enlightening infographic: the comparison between number of humans killed by sharks every year (12) and the number of sharks killed by humans every hour (11417)

About shark finning on Geenpeace

10,000 Facebook Fans
Posted on 22 April 2013 by LePecheur
This entry was posted in Ecology. Bookmark the permalink.