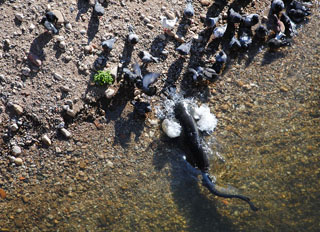 We all saw images of orcas hunting penguins or sea lions on a beach: they jump suddenly out of water, and grab their prey. In this video the same tactic  by beaching is employed by a gang of catfish against pigeons.
The impressive hunting technique of  killer whales has been transposed in freshwater: two successful attacks for two failed.
This video was filmed in southern France by scientists studying the behavior of catfish.

10,000 Facebook Fans
Posted on 8 February 2013 by LePecheur
This entry was posted in Fishes. Bookmark the permalink.